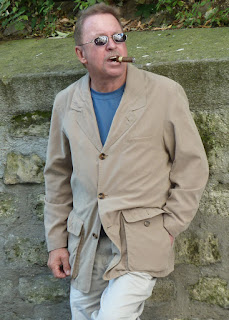 My parents divorced when I was four due to my father’s extreme alcoholism, a lovely gift he managed to pass on to me. Mother went to law school, while myself and two older sisters were looked over by a succession of nannies. Weekends and summers were spent on grandfather’s cattle ranch in Jupiter, Fl where I learned to fish and shoot and ride horses.

I planned to be a lawyer, but eventually—brought up in a family of readers and in love with books ever since reading Tarzan, the Ape-man in third grade—around the age of thirteen I began to re-think a law career. Influenced by Hemingway’s The Sun Also Rises, and Joyce’s Portrait of the Artist as a Young Man, I started writing stories.

When I was fifteen I stole a copy of Kerouac’s On the Road from the drugstore, and when I finished it immediately ran away from home, looking for the road and the kicks Kerouac had written about. My road trip didn’t last long and after being returned home by the authorities I entered high school, where Tom Wolfe’s Electric Kool Aid Acid Test and the hippie explosion of the ‘60’s steered me into the counterculture. The fact that the local narcotic agents in Gainesville, FL, were breathing heavy down my neck, convinced me to drop out of college in 1972 and become what I envisioned as being a wandering Beat poet.

Reality caught up to me in my early 30’s. To pay the bills I started a mundane career in pest control, married, and raised a family in my hometown. During the 1980”s I stumbled into the poetry scene of South Florida and became heavily involved, reading my poetry at any available venue, as well as publishing that poetry in small literary magazines across the country.

I moved my family to Sebastian, FL in 1990 for the good fishing in the Indian River, as well as to get out of the madness of Ft. Lauderdale and bring my daughter up in a smaller community.

Due to health concerns related to my alcoholism, I retired in 1999. With more free time on my hands, along with being clean and sober after a thirty year run, I started writing fiction again. In 2004 I began writing the stories—though I had no idea at the time that would be the case—that would develop into the novel, Men Without Hate. I am currently working on a prequel of sorts to Men Without Hate, as well as revising a novel I wrote during the long process of finding a home for Men Without Hate.

And of course, I'm deeply pleased that Men Without Hate now has a home at the excellent All Things That Matter Press and is for sale on Amazon.com. Seeing one's book officially in print is every author's dream, and I'm eternally grateful to all that have offered their support for me and the book over the years.

On my off time I enjoy fly fishing in the Indian River for the snook, redfish, and tarpon roaming those waters, wing shooting in season, as well as maintaining a voracious, and longstanding, reading habit.
Home
Subscribe to: Posts (Atom)

Information and Inspiration on the Civil War

Information and Inspiration about WWII and the Pacific Theater